What can SEBI learn from Thomas Piketty?

A small number of people in India earn enormously more than the rest says celebrated economist Thomas Piketty, in a new co-authored research paper, tantalizingly titled “British Raj to Billionaire Raj”. Piketty and Lucas Chancel show that income inequality in India, as measured by the share of total income, is at its highest point in nearly a hundred years.

Let us try and understand this more simplistically in the context of the corporate world.

According to Piketty’s research, if a company has 100 employees and pays a total of Rs 10 crore in salaries to all, then its Managing Director (top 1 percent) alone earns Rs 2.2 crore (22 percent) while the remaining 99 employees get a mere Rs 8 lakh each on average. So, the MD earns nearly 30 times more than the average worker. Technically, this may not be entirely accurate since the executives just below the MD will earn much more than Rs 8 lakh while those at the lowest rung will earn much lower. But a MD-to-worker pay ratio illustration to explain income inequality can be a useful mnemonic and if any, will understate actual income inequality.

Similarly, in a larger company, say with 10,000 employees and a total salary budget of Rs 1,000 crore, their research finds that the MD (top 0.01 percent) is likely to earn Rs 40 crore (4 percent) while the others will earn Rs 10 lakh each on average. In this case, the MD earns 400 times more than the average employee.

Viewed in this framework of MD-to-average worker pay ratios, it is easy to fathom how income inequality can be exacerbated in corporate India. Do corporate India’s pay levels corroborate the findings of Piketty and Chancel?

This analysis uses a dataset of 20 companies – 15 private sector and 5 public sector – across a variety of industries that in total employ 1.6 million people.

These companies were chosen merely as sample representatives of their sector and are neither exhaustive nor fully representative. Data on managing directors’ pay, the total number of employees, total employee salaries, company profits and one-year stock price returns were obtained for each of these companies for the fiscal year 2017. Compensation for executives typically includes cash and stock options. For the purposes of this analysis, we use only cash and not stock compensation which can vary widely, and is subject to misinterpretation. Using this dataset, we calculated average employee pay by merely dividing the total salary expense by the total number of employees, which is not perfect but a reasonable proxy. Median pay representing the salary level of half the workforce of a company would have been more accurate but difficult to compute.

Tata Consultancy Services Ltd. and embody moderate MD-to-worker pay ratios of 25 times despite being as successful as their peers in corporate performance.

Recall, this pay gap ratio is actually an understatement since this analysis is based the average and not the median pay of the worker. On a median pay basis, we estimate that the typical MD of a large private sector enterprise in India is paid 300 times more in cash compensation than their employees. It is an intuitive belief that the absolute levels of profits of a company determines its MD’s pay. 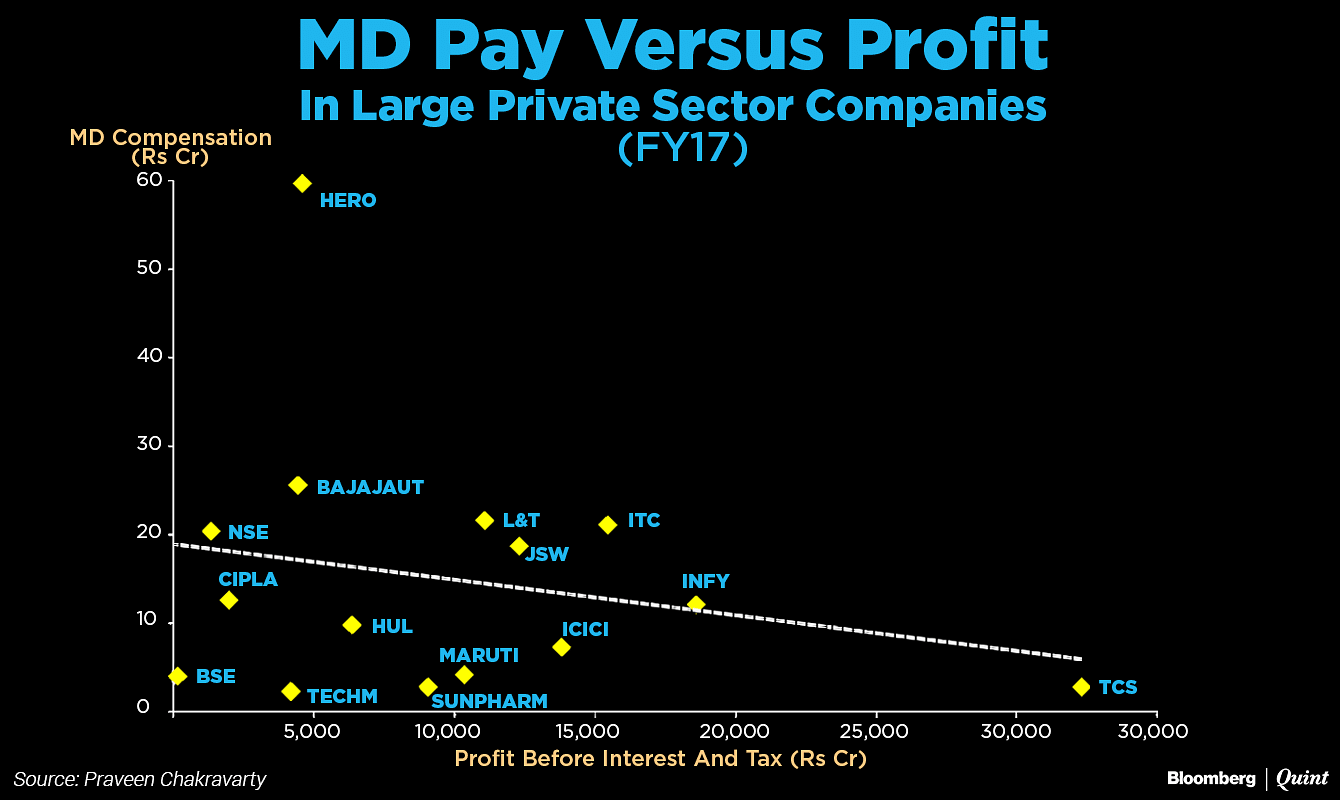 If the size of a company’s profits is not a factor to determine its MD’s pay, neither is the company’s stock performance.

Ironically, some of the best performing shares in the dataset were the public-sector companies but their MDs were the lowest paid.

Infosys was the worst performer in terms of stock performance (-16 percent) in FY17 in this set of companies while Punjab National Bank was the best performer (+77 percent). But the MD of Infosys was paid 40 times more than the MD of PNB. In summary, private sector companies typically pay their MDs nearly 140 times more than their average worker or 300 times the median worker, regardless of profitability or stock price performance. Thus, corporate India pay levels seem to corroborate Piketty and Chancel’s finding of India’s extremely high income inequality. It may be tempting to compare this MD-to-worker pay ratio of corporate India with other countries but it is a futile exercise. There are reports about the average MD in the United States earning 335 times more than the average worker and in the United Kingdom, 129 times more. But these are not comparable numbers to India for various methodological reasons.

Egregious executive compensation is a raging issue globally. The world’s largest investor, BlackRock, has gone so far to suggest a cap on MD-to-worker pay ratio for companies. The Securities and Exchange Board of India in 2014 mandated all public listed companies to disclose the ratio of the median pay of all employees to the pay of each director of the company. While this disclosure is welcome, it does not go far enough to prescribe a more transparent process to approve executive pay. For example, should the minority shareholders of Bajaj Auto not have approved an FY17 bonus of Rs 25 crore to their MD rather than just have the Nomination and Remuneration Committee of the board decide for them?

It may not be prudent for a regulator to intervene and decide limits for executive compensation but it is not a stretch to ask for more transparency in such decisions and the approval of the minority shareholders.

Perhaps it is time for SEBI to consider a ‘Say on Pay’ rule in India that will require any company seeking to pay its executives in cash compensation more than say 25 times its median worker, to seek the approval of minority shareholders.

Inequality is not an issue that one can turn a blind eye to in today’s era. At a time when hundreds of millions of India’s youth are worried sick about lack of jobs or losing their jobs, a few earning exorbitant sums can cause social strife. At the same time, temptations to intervene excessively in markets and regulate them needlessly should also be avoided. A deft balance can be achieved through a proper disclosure and approval process for executive pay such as a ‘Say on Pay’ regulation.