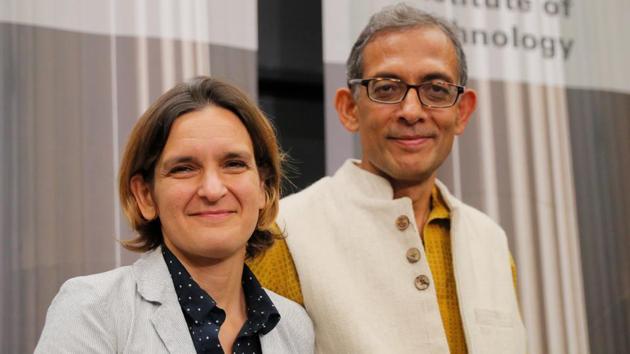 Esther Duflo and Abhijit Banerjee, two of the three winners of the 2019 Nobel Prize in Economics, at Massachusetts Institute of Technology, Cambridge, Massachusetts, US, October 14, 2019(REUTERS)

Let us suppose that a government wants to launch a scheme that will give a monthly income to its poorest citizens as part of its welfare programme. Will this scheme make the recipients of this scheme “lazy” and “dependent”? To answer this question, typically policymakers in the government will ask economists for their opinion. Depending on who they ask, economists on the Right will vociferously argue that it will make people “lazy”, while economists on the Left will vigorously argue that it will not. Regardless, all of them have likely formed their views largely based on their beliefs and ideological biases.

This was the exact same question I posed to my good friend, Abhijit Banerjee, in January 2019. The context for the question was an idea mooted by the then Congress president, Rahul Gandhi, to develop a basic income support scheme for India’s poorest. Abhijit responded immediately saying there is no evidence to show that an income support programme makes the poor “lazy” or drop out from the workforce. But his view was not based on his ideological preferences or biases.

It was based on the results of several experiments done on the ground by him and his team in a scientific manner to study the impact of such a program. These experiments are called Randomised Control Trials (RCT), a technique pioneered by Abhijit Banerjee, Esther Duflo and Michael Kremer, for which they were awarded the 2019 Nobel Prize in Economics this week.

I have known Abhijit for a decade. His devotion to data, empirics and evidence is infectious. Being an ardent believer in empiricism, I became an instant fan. But his intellectual curiosity and interest in the state of our nation and society is even greater. He is passionate about public policy and a strong believer in its power to improve living conditions for the poorest and deprived sections of our society. It was during the initial years of Aadhaar that we began discussions on policy matters. We had been in touch through the years and bonded over food, south Indian filter coffee and Carnatic music, other than matters of policy and society.

When the Congress first internally deliberated the idea of an income support programme to be included in the manifesto, the first person I reached out to was Abhijit. It was an obvious choice, endorsed by the leadership, given Abhijit’s copious body of work on the impact of various poverty alleviation programmes across the world studied through RCTs.

To be clear, Abhijit is not political and would have gladly worked with any political party that reached out to him to ideate policy solutions for the weaker sections of our society. Knowing Abhijit, he would not want to waste time on flippant political ideas floated purely for the purposes of an election. I assured him that this was a serious effort undertaken in full earnest to delve into the details and formulate an income guarantee scheme for India’s weakest sections.

Once convinced, Abhijit was forthcoming with ideas and inputs for the basic income scheme. He roped in a few other renowned economists and helped us think through the idea with data and evidence from other countries. He challenged us and was his typical intellectually honest self through the many months of discussions. He was a strong believer in the idea of a basic income for the poor and the powerful multiplier effect it can have on the overall economy. Such was Abhijit’s passion and conviction that, at times, I thought he championed the idea even more than some of us did! Abhijit happened to visit India just before the election and after the Congress announced the scheme, titled NYAY. He decided to do some media interviews and explain the power of such an idea to alleviate poverty in the country.

Of course, the Congress could not convince voters in the election. Either the message did not reach voters enough or the voters did not believe the Congress. Regardless, the idea is even more relevant to the economic situation today where such an income support scheme could have boosted demand in the overall economy as well as lifted incomes for the poorest sections of our society.

I am only thrilled and excited that the Nobel Committee decided to recognise Abhijit Banerjee and his co-winners’ tireless and path breaking efforts in improving public policy choices for the upliftment of the poor. They truly deserve it. Perhaps I should now take Abhijit’s help to design RCTs to help understand why a weakening economy did not translate to an alternative voting behaviour by the people. Or maybe, he has a bit more important things to attend to, now.