The previous “Noise to Signal” column titled The Silent Role of Credit Ratings in India’s Bad Loan Crisis highlighted how independent, private sector credit rating agencies and equity analysts issued glowing, positive ratings to all the corporates that indulged in heavy borrowing during the years 2010-2014.

It argued that in this backdrop, it is perhaps inaccurate to claim that India’s bad loans crisis is entirely due to a nexus between public sector banks (PSU) and crony businessmen. The column received wide feedback, with some wondering how private sector banks seem to have emerged unscathed in the current bad loans crisis.

As of financial year 2014-15, reported non-performing assets (NPA), aka bad loans, of private sector banks were roughly 1.6 percent of their total assets while that of PSU banks were nearly three times worse at 4.5 percent. India’s private sector banks, on average, command a valuation of nearly 2 times their book value in the stock markets. On the other hand, government owned PSU banks are valued significantly below their book value. This discrepancy in NPA levels is the justification for the large valuation gap between private sector and PSU banks. Thus the argument, that while credit rating agencies, equity analysts and PSU bankers may have erred in judgement, private banks seem to have been more prudent in their lending decisions.

Loans to businesses are ostensibly far riskier than loans to consumers. Consumer loans are typically well secured through regular income streams of individuals and are backed by assets such as homes or jewellery. Recovery of corporate loans, on the other hand, is dependent entirely on the success of the business plans for which the money has been borrowed. In general, NPA levels in consumer loans in India have tended to be less than half of NPAs in corporate loans, over the past few decades. In other words, there is twice the chance that a loan to a corporate will turn sour vis-à-vis a loan to a consumer. 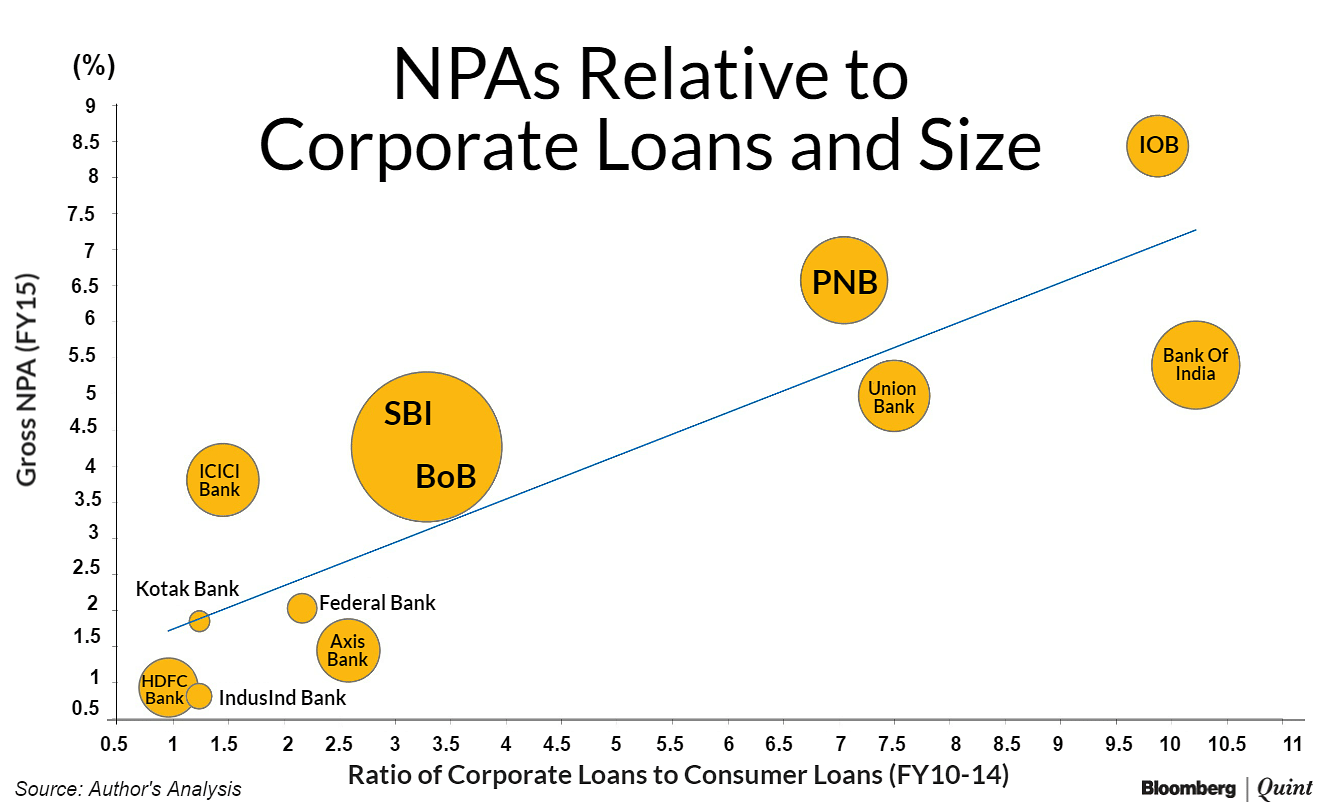 The Path to Higher Valuation

However, if one were to ask the question – had Kotak Mahindra Bank indulged in similar share of corporate lending, as say Union Bank, relative to its size of assets, would its NPAs still be as low? Of course, it’s a purely hypothetical and an academic question but nevertheless, one that can perhaps be insightful.

Similarly, ICICI Bank’s reported FY15 NPA of 3.8 percent could have jumped to 6.4 percent, (same as Punjab National Bank’s FY15 reported NPA) if its ratio of corporate to consumer loans mirrored those of PSU banks.

True that this is a simplistic extrapolation exercise and does not imply that these private sector bank NPAs would have actually been at these levels for similar share of corporate lending. But the point is that a comparison of NPAs between private sector and PSU banks is too simplistic.

Normalising for both a bank’s share of overall corporate loans in the system as well as a bank’s own share of corporate loans relative to its book, the charts below show that while PSU banks still have larger NPAs than private banks, the difference in NPA levels between PSU banks and private sector banks is not as large as their stock market valuations seem to imply. 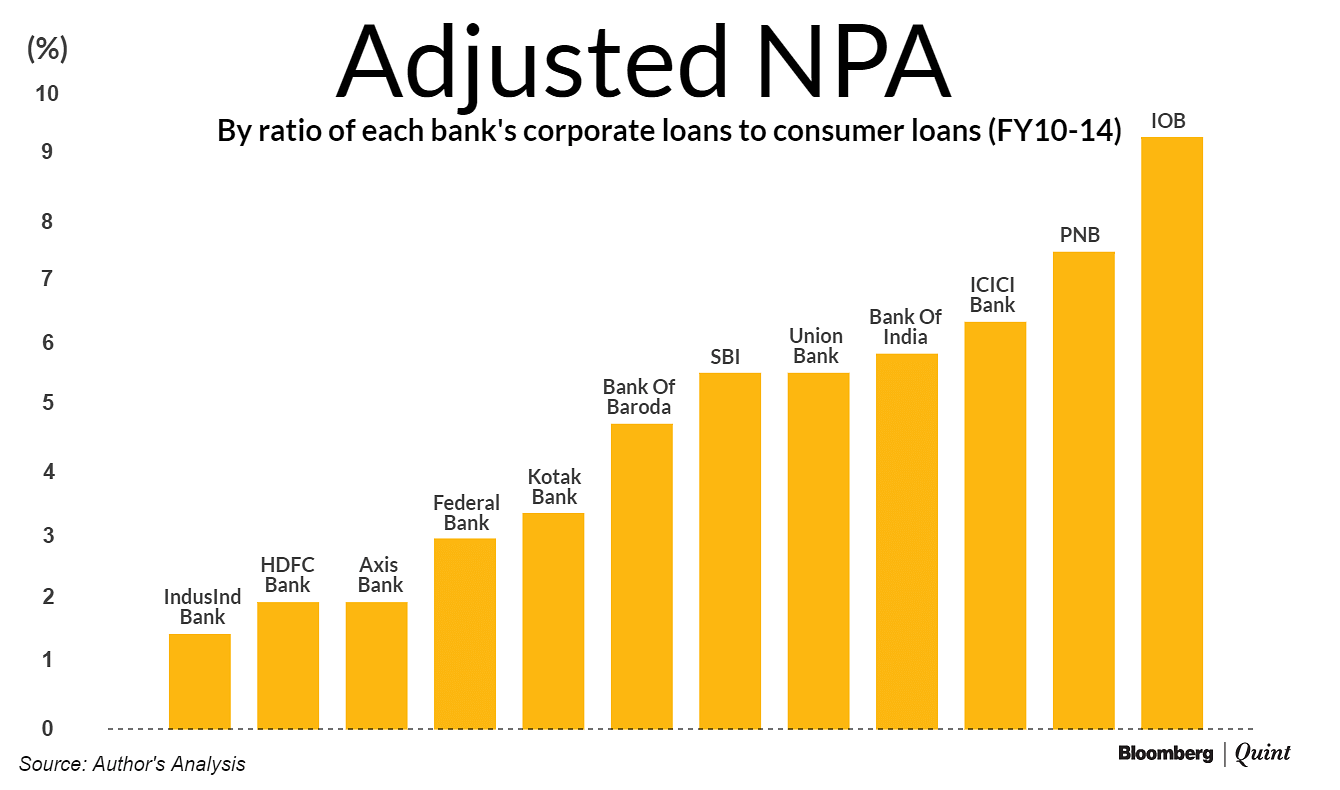 Mirror, Mirror on the Wall

HDFC Bank is one of the world’s most valued banks, trading at nearly four times its book value. It is largely because HDFC Bank religiously shuns corporate lending. Despite being one of the largest private banks in India, it contributed less than 5 percent of overall corporate loans since FY10 while it accounted for 20 percent of overall consumer loans. In contrast, the largest public sector bank, State Bank of India, accounted for 35 percent of all corporate loans in this period and an equal share (20 percent) in consumer loans.

Admittedly, this normalised NPA analysis does not factor in behavioural changes in lending practices and the possibility that private sector banks get to cherry pick corporates given their low share of corporate lending. Also, those that are turned away by private sector banks tend to borrow from PSU banks, leading to adverse selection impact on PSU banks. Then, to improve efficiency, should India’s public sector banks also eschew corporate lending and stick to consumer lending, largely?

If say, State Bank of India had adopted HDFC Bank’s ratio of corporate to consumer loans during the period FY10 to FY15, it would have meant $500 billion less capital for Indian corporates in this period. Perhaps SBI’s NPAs today would have been much better. But with no other financing alternatives, such as robust corporate bond markets or other debt investors for corporates to borrow this $500 billion from, one wonders if India could have still built the airports, roads and power plants that it did in those years.

Sure, some of these loans went awry. Sure, some may have even been crony lending. Surely, some of these riskier corporate loans could have priced in the risk adequately. However, it is quite likely that the very risky nature of corporate lending vis-à-vis consumer lending combined with the fact that only the PSU banks indulge in such heavy corporate lending explain the higher absolute NPA levels of PSU banks versus the private sector banks.

This is certainly not to condone perpetual recapitalisation of PSU banks with taxpayer money for their bad loans sins. But to simplistically argue that PSU banks should merely imitate private banks in their lending behaviourfor efficiency and valuation reasons may perhaps be akin to cutting one’s feet to fit into small shoes rather than to buy new, larger shoes, as the Chinese saying goes.

The author thanks Kush Shah and Ashish Gupta of Credit Suisse India for their help with data and Kadambari Shah of IDFC Institute for help with analysis.

The author thanks Kush Shah and Ashish Gupta of Credit Suisse India for their help with data and Kadambari Shah of IDFC Institute for help with analysis.

*Normalisation – is a statistical technique.

The same has been applied to each bank’s ratio ofcorporate to consumer loans. Making it more effective to compare NPAsacross private banks and PSU banks.