India’s Capital Markets: Where Has All The Money Gone?

Sensex at 30,000, foreign investor and domestic mutual fund flows at record highs, sweeping ‘reforms’ announced by the Securities and Exchange Board of India (SEBI) – India’s capital markets are the toast of the nation currently.

That India’s capital markets are among the most developed and efficient in the world is an accepted notion, especially among readers of this column. India’s stock exchanges – Bombay Stock Exchange (BSE) and National Stock Exchange (NSE) boast of state of the art technology and are among the fastest in the world in terms of transaction time. India ranks among the top two globally in terms of volume of trades in its capital markets.

Amid such euphoria, comes a sobering reminder from SEBI’s latest investor survey, made available recently. The phrase “stock markets” is most associated with the word “danger” by a majority of India’s households. ‘Danger’ in the sense of distrust and risk. It is well known that a miniscule fraction of India’s households invest in the stock markets. The survey optimistically estimates that 30 million of the 220 million households invest in the stock markets, but that is a gross exaggeration going by the estimation methodology adopted. It is also clear from comparing the recent survey with the previous such survey of 2010 that Indian households are no more trusting of the stock markets today than they were earlier.

Why is it that India’s capital markets receive global plaudits and attract foreign investors on the one hand while Indian households are distrustful of them and stay away? The structure of India’s stock markets and its nature of development may provide the answer.

The Purpose Of Securities Markets

The origins of a stock market can be traced to the Dutch East India Company which issued shares to the general public in 1602 to raise capital to build the spice trade. Ever since,

India’s capital markets have evinced tremendous interest in the last decade. This analysis uses data from SEBI’s annual reports which are available only until 2015-16, so the period of reference starts in 2005.

Where Is All This Money Going?

With such growth in foreign investors and mutual funds, it would seem logical to expect that Indian corporates mobilised much larger sums from the capital markets in 2015 than in 2005. As the chart below shows, that is not true. The chart shows the trendline of foreign institutional investor (FII) flows, mutual fund flows and funds raised by corporates in the period 2005 to 2015.

Indian corporates’ ability to raise capital has remained flat in this period despite a surge in FII flows. In simple terms, this chart says that one can reasonably expect foreign flows to continue to increase in the years to come while the same cannot be said for mutual fund flows or for companies’ abilities to mobilise resources through the primary market. 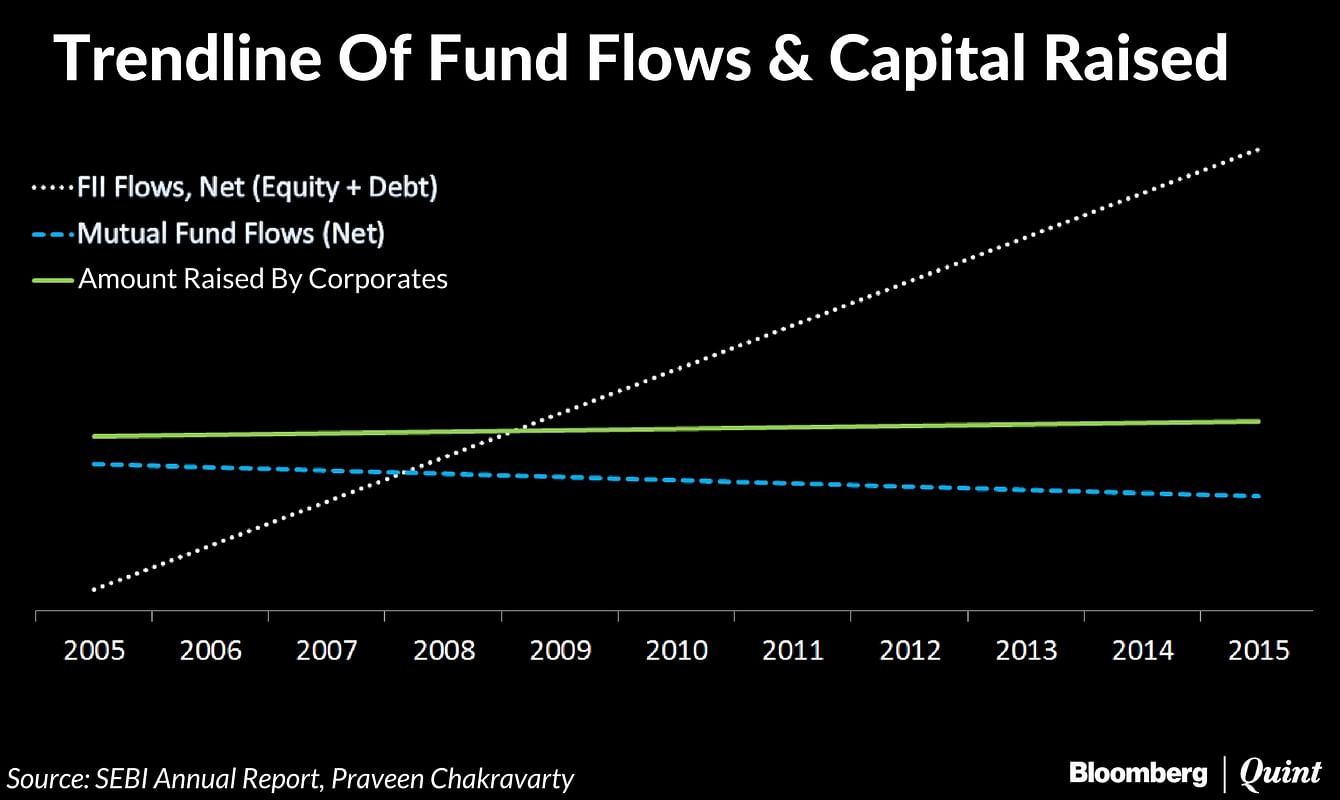 If there is a lot of money flowing into the stock markets but corporates are still unable to raise resources, where is all this money going? The chart below shows the growth in amount of resources raised by corporates every year (primary), value of shares traded annually (secondary) and value of derivatives traded (tertiary) for the period 2005 to 2015. 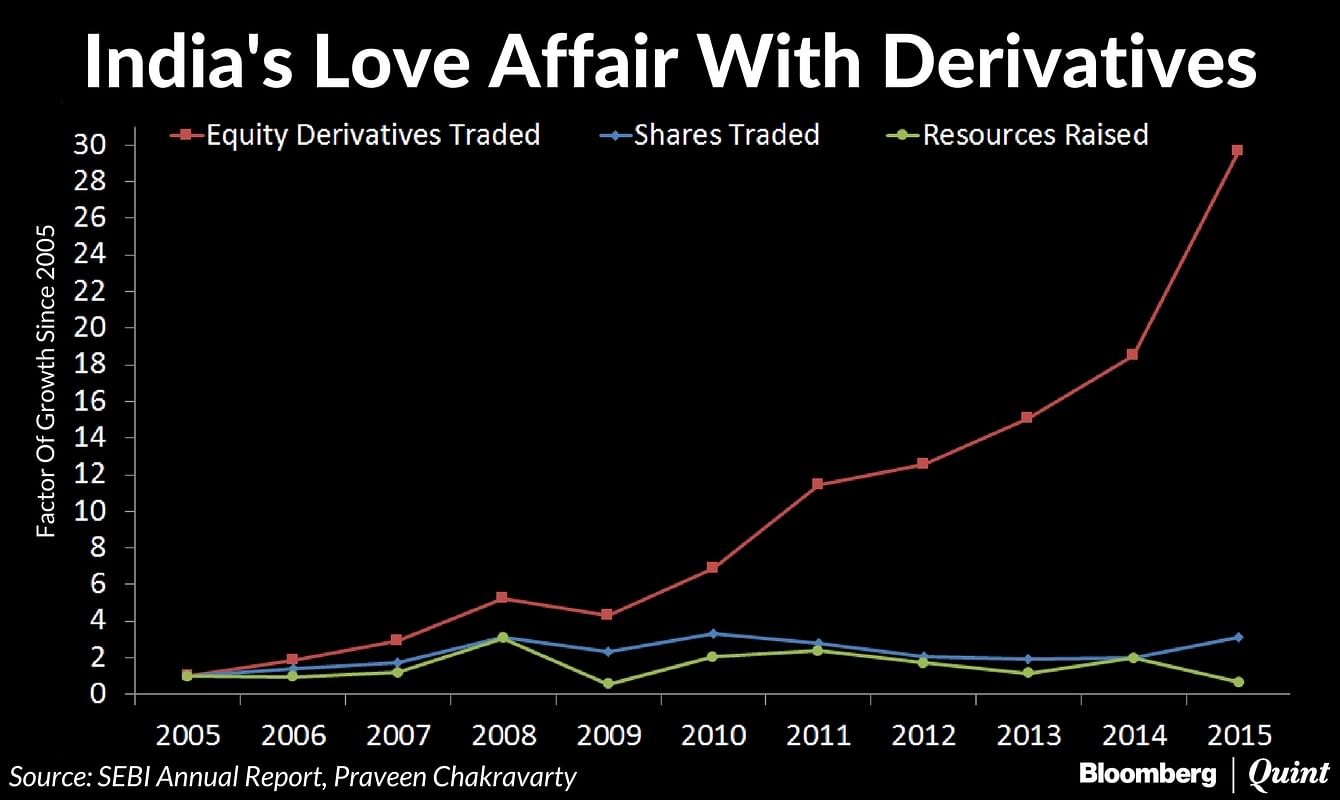 The value of derivatives trading has risen 30 times in this period while the amount of resources raised by corporates from the capital markets has remained flat in this period.

Despite robust capital market performance in 2016 and 2017, Indian corporates raised only as much capital in these years as they did almost a decade back.

To put that in context, there was much grief over growth in bank loans to industry being at a 60-year low of 5 percent. That is, there was much despondency over corporates borrowing only 5 percent more from banks than they did last year. In the capital markets, resources to corporates are not growing but are volatile and at best, have stayed flat for a decade. Yet, the Sensex is at an all-time high and foreign investors are flooding in. In other words, all that money that flowed into the stock markets did not necessarily go into funding Indian industry but instead fuelled trading in derivatives. Is this the norm in other markets globally?

But India’s exchanges traded twice as much in equity derivatives volumes as the United States in 2015. 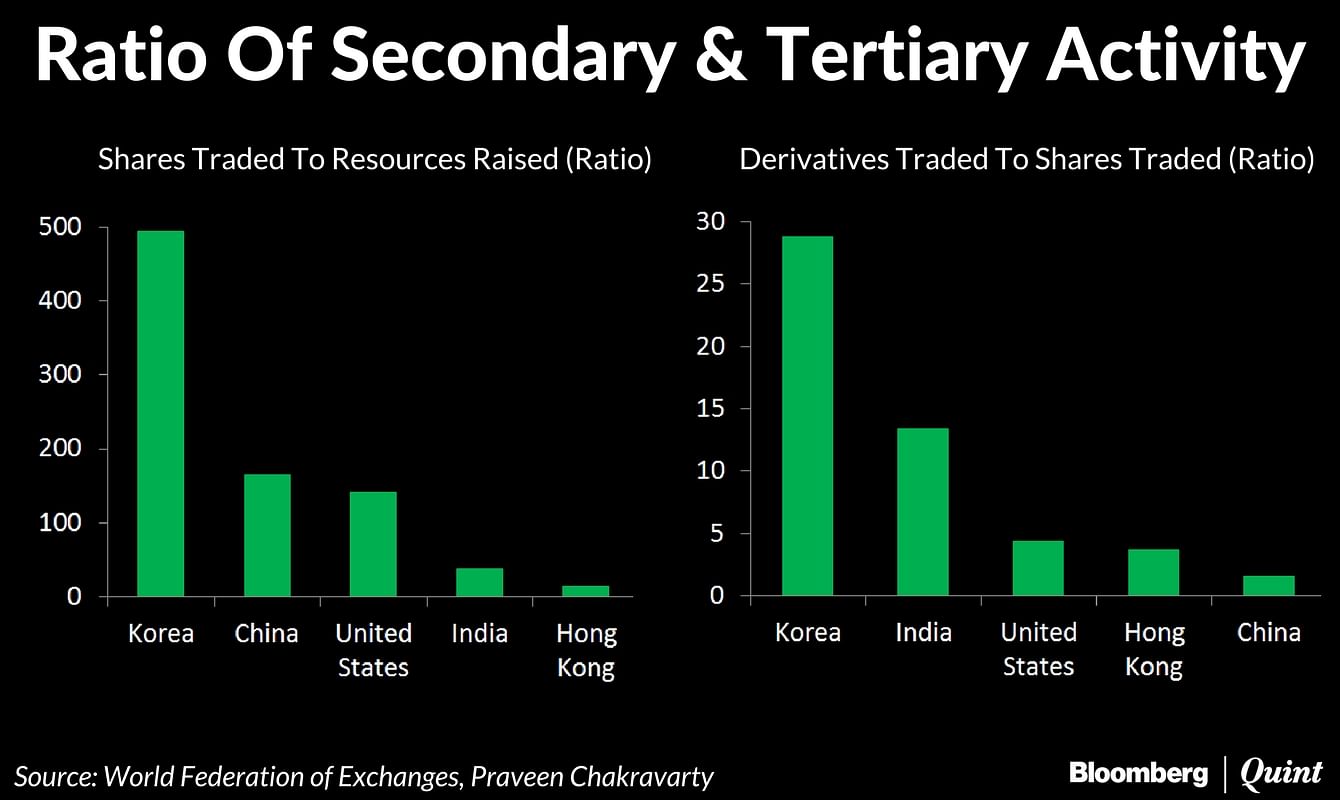 India’s capital markets saga is one of an inexplicable love affair with derivatives.

To be clear, this is not to suggest that there is any systemic risk looming nor is this to pass moral judgement on such affairs. Viewed in the context of a first-principles based framework of a well-functioning stock market of channelling household savings to industry, India’s stock markets are clearly not as efficient and well developed as they are made out to be.

The seeming success of Indian capital markets is the success of speculative trading in derivatives.

India’s stock exchanges earn more than half their income from such trading fees. It is in this context that all policy debates of India’s capital markets revolve merely around sustaining trading on India’s exchanges and protecting them from moving to foreign havens etc. Protecting Indian exchanges from global competitors in derivatives trading should be the least of all policy concerns of India’s capital markets.

Exchanges Need To Get Real

Indian households save about $400 billion a year on average. Indian mutual funds received just $100 billion in net inflows in an entire decade. Policies that involve tinkering with regulations around commodity derivatives and labelled ‘reformist’, miss the forest for the trees. The most fundamental policy question is – in a capital starved nation, why are capital markets not performing their basic function of channelling household savings to Indian industry?

With India’s two leading exchanges becoming publicly listed companies, with quarterly shareholder expectations to fulfil, there is every incentive to protect their easy, fat profits from derivatives, algorithmic and high frequency trading, and none to invest resources in changing perceptions and bringing new domestic investors to the capital markets.

SEBI cannot be the lone crusader in this effort. The exchanges have a lot more responsibility to fulfil in society than just attempting to reduce transaction time for their traders from 6 microseconds to 5 microseconds through privileged access to their trading terminals.