A blueprint to revive the economy (Co-authored with P. Chidambaram) 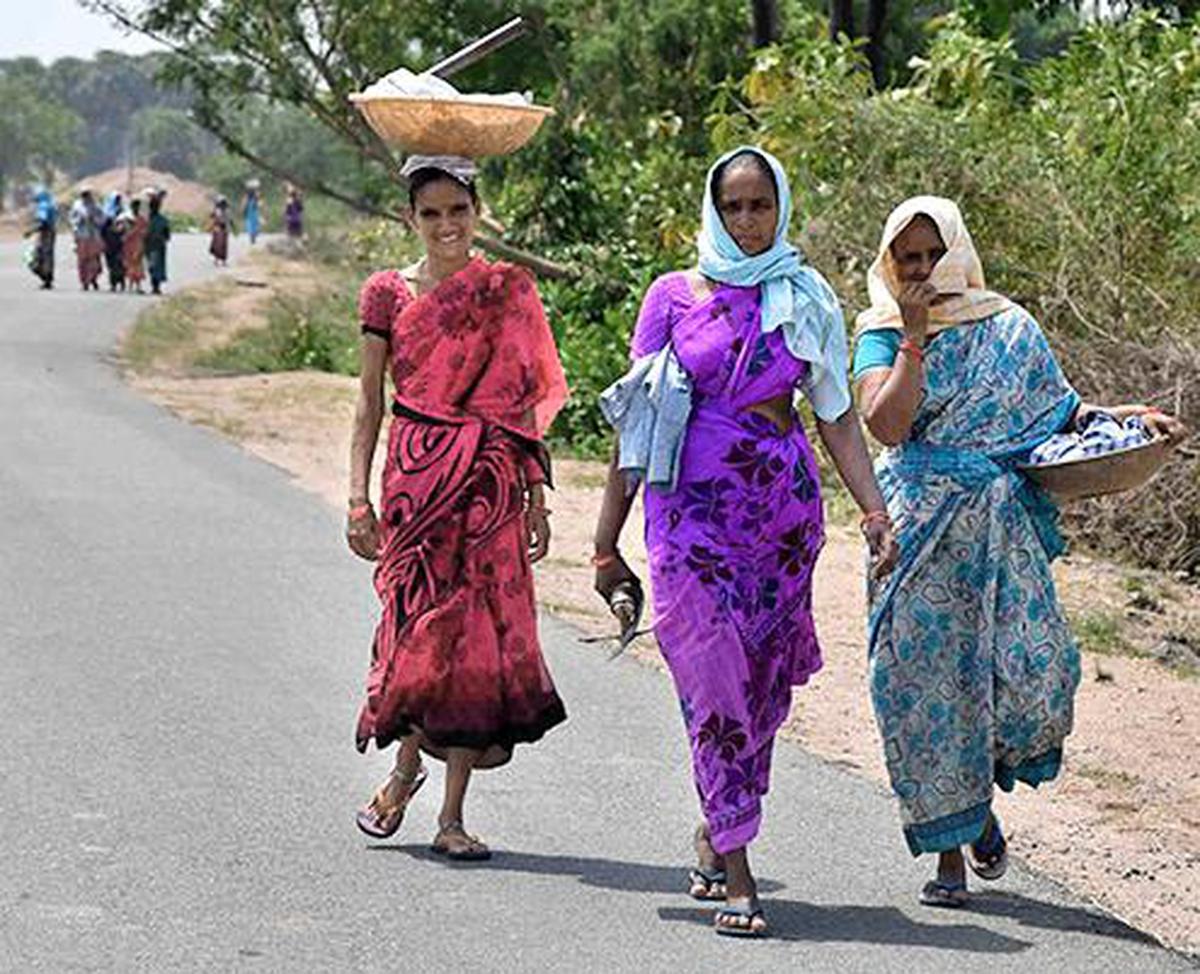 Khammam, Telangana, 08/05/2019: Mahatma Gandhi National Rural Employment Guarantee Act (MGNREGA) workers return home after completion of work at Chirrumarri village in Khammam district on May 08, 2019. Photo: G.N.Rao/ The Hindu
“We have no food, no home, no income. My children are starving,” cried Prachi to a TV anchor on April 14. Prachi, a migrant worker from Bihar, is one of the roughly 400 million workers in India who are dependent on daily wages for their survival. She has lost her source of livelihood because we are under a lockdown and economic activity has stopped. A lockdown is necessary to prevent the spread of COVID-19 . But we need not make a choice between saving lives and protecting livelihoods. We can achieve both through a ‘smart’ lockdown and careful economic management.

The phrase ‘Greater Depression’, which has entered the vocabulary of economists, highlights the gravity of the humanitarian and economic crisis confronting us today. Every sector of the economy in every nation has come to a screeching halt. We extend our sympathies and wishes to all the leaders of the world, including our Prime Minister, for the enormous responsibility of steering their respective nations through this pandemic. In the spirit of non-partisanship, here is a carefully crafted economic proposal for consideration of the Indian government to help our fellow citizens.

First, it is important to diagnose the scale of the economic crisis accurately. Prachi has lost her job because her employer has been forced to stop commercial activity. It is important for the government to feed Prachi and help her employer to restart activities so that he can re-employ her soon. The economic crisis needs a demand side and a supply side response. It is morally imperative that we immediately address the miseries of the poor and vulnerable by providing money as well as food. The bottom half of all households (13 crore out of 26 crore families) must be given ₹5,000 per family in their bank account within a week. The list of households and the bank details (largely Aadhaar-seeded) are available in the government’s various schemes such as PMJAY and MGNREGA. Besides, the States have their ‘below poverty line’ lists. This will cost a maximum of ₹65,000 crore. Further, depending on the need, for the month of May, these families can be given ₹3,000 each. This will cost an additional ₹39,000 crore.

More than cash, scholars like Jean Dreze have observed that it is food that people need most urgently. India has far in excess of the buffer stock requirement. The Central government has already announced distribution of free food, but reports suggest that there is either lack of food supplies at the local ration shop or identity requirements of ration cards are proving to be a roadblock. The government must universalise food distribution immediately, to remove identity requirements, and work with State governments to rush supplies to every ration shop so that every family gets free grain.

Next, the April 15 guidelines allow MGNREGA work, which was stopped due to the lockdown, to be restarted while observing social distancing norms. District collectors should be given the freedom to start and expand works under MGNREGA. If work cannot be given for some reason, 10 days’ wages every month should be paid to the registered MGNREGA workers in the panchayat/block until the scheme is resumed. This will ensure some livelihood support. Economists Amartya Sen, Raghuram Rajan and Abhijit Banerjee have also called for urgent implementation of these measures.

The next step is to help Prachi’s employer to resume commercial activities, which can be done by re-opening the economy gradually. The key to reopening is our ability to identify sensitive COVID-19 hotspot areas and containment zones. The Central and State governments must work in tandem to identify hotspots, preferably at the level of the block/mandal and not just at the district level. This can be done with the help of public health experts and epidemiologists through strategic testing.

Starting May 4, the new guidelines must be expanded to permit all economic activity (with a few exceptions) in non-hotspot areas. Economic activity requires labour and capital, which are significantly diminished due to the lockdown. Continuous testing and monitoring will be needed as new areas may turn into hotspots and hotspots may become non-hotspots.

Coronavirus lockdown | How can the poor survive without cash in hands, asks Chidambaram

Let small shops, service establishments and the self-employed start commercial activity in their areas. Three-quarters of the 80 million enterprises are establishments that operate in local areas. As long as they observe the usual precautions, they will not add to the risks. This will boost local economic activity.

The new guidelines permit agricultural activity during the rabi harvest season. This is a step in the right direction. However, the constraint for all these commercial and agricultural activities will be the availability of labour for which re-opening of travel and transport is crucial. But it is also the riskiest. Mass rapid transit as well as private transport must be gradually opened in non-hotspot areas. It is necessary to open up rail and bus transport with adequate precautions such as temperature checks and social distancing norms inside buses and trains. One strategy could be to reduce the number of passengers in each bus and train by increasing the frequency of the vehicles or by running them at half-capacity. There will be trade-offs, but each local transport authority can choose the right policy and tweak it from time to time.

The other essential ingredient for resumption of economic activity is access to capital, especially working capital. A majority of the small and medium enterprises (SMEs) would have run out of cash and lost significant revenues. No bank is likely to lend to them. The government must step in to provide credit guarantees that can incentivise banks to SMEs. The Reserve Bank of India (RBI) has already instructed banks to issue a moratorium on loan obligations for three months. If needed, this can be extended by another three months.

For the formal sector, we can take a leaf out of the U.S.’s Paycheque Protection Program. The idea is for the government to help formal sector businesses to keep workers on their payroll without resorting to retrenchment or lay-offs. The 2017-18 Economic Survey estimated, using the Employees’ Provident Fund Organisation (EPFO) data set, that there are 40 million employees earning less than ₹15,000 per month who are employed in firms registered under the Goods and Services Tax (GST). It is likely that they are vulnerable to retrenchment. The government could ‘protect their pay cheques’ by funding their employers to pay them for one or two months. This can be implemented using data from the EPFO and GST databases.

Coronaviru lockdown | It’s now clear that the cure is worse than the disease, says Praveen Chakravarty

The RBI, and through it the banks, should be encouraged to make capital available liberally to sectors such as tourism and manufacturing, which need specific interventions. External trade will continue to be tepid. India must do whatever it takes through export incentives and strategic use of foreign exchange reserves to capitalise on the export opportunity arising out of this crisis and stimulate exports dramatically over the next few years. Exports can be the key to jobs for hundreds of millions of skilled and unskilled workers, as it was during the boom years 2004-2010.

Fiscal stimulus measures on the demand and supply side must be supplemented by monetary stimulus from the RBI with re-designed measures such as moratorium, loan forgiveness, regulatory forbearance, revised NPA regulations and easing the cycle of credit flow.

Do we have the money to indulge in such a revival and recovery package? It is our estimate that the total fiscal package will cost ₹5-6 lakh crore. That amount is available. The Centre and the States have a total expenditure budget of over ₹70 lakh crore for 2020-21. The Centre alone has budgeted to spend ₹4 lakh crore on capital expenditure this fiscal year. In a crisis, much of the capital expenditure may not be possible at all, and even if it is, must be deferred to the next fiscal year. Besides, more savings can be identified by axing wasteful expenditure. Further, the Centre can borrow money during times like this without crowding out private investment or pushing up interest rates. As a final resort, the government can monetise part of additional deficit, otherwise known as ‘printing money’.

A microorganism has brought humankind to its knees. As health scientists have said, we must learn to live with the virus. We need to act now to ensure that Prachi and millions like her can live through this and experience the new normal.

P. Chidambaram is former Finance Minister of India and a sitting Member of Parliament; Praveen Chakravarty is a political economist and a senior office-bearer of the Congress party