States Need An ‘Act Of Comfort’ On GST, Not A Letter Of Comfort

Workers unload a statue of the Ashoka Stambha outside the the Central Secretariat buildings, in New Delhi. (Photographer: Anindito Mukherjee/Bloomberg)

The Government of India’s position on the standoff between the federal government and the states on the issue of the Goods and Services Tax revenues was eloquently explained by the Expenditure Secretary in an interview to BloombergQuint. The government’s defence seems to rest on a mix of legal opinions, bureaucratic rules and economic rationale. The Attorney General of India’s opinion and specific paragraphs documented in the minutes of earlier meetings of the GST Council were cited to demonstrate that the centre never committed to borrow money to fulfill its obligation to the states. The government of India also offered to provide a “letter of comfort” to the states to help them borrow and fund their revenue gap.

GST, launched on July ,1 2017, was a compact between the centre and the states. GST required democratically elected state governments to relinquish their taxation powers. The centre in return, promised a significant boost to economic growth driven by the efficiency of ‘one nation one tax’ and an increased tax buoyancy resulting in higher tax revenues for the states. 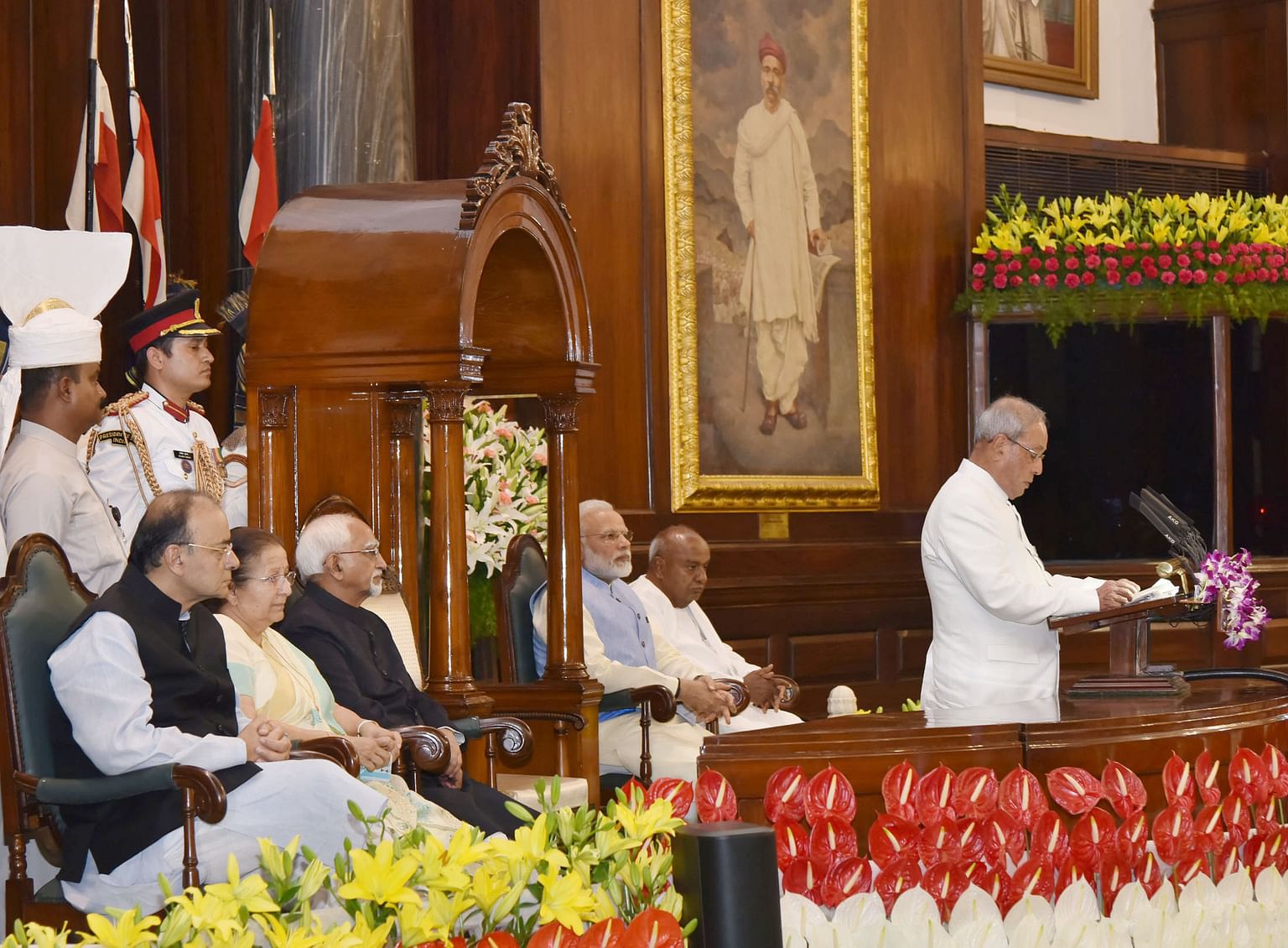 Then President, Pranab Mukherjee addressing at the ceremony to launch the GST, in Central Hall of Parliament, in New Delhi on June 30, 2017. (Photograph: PIB)

The states were justifiably apprehensive of giving up their taxation powers for an unknown future promise. The compromise solution was that the centre would guarantee the states a certain minimum revenue every year for five years. The political economic significance of states sacrificing their taxation powers does not seem to be well understood by economists and the corporate class. It is perhaps best explained through a business analogy. It is similar to say the Telecom Regulatory Authority of India convincing all telecom companies to sacrifice their individual pricing powers and have a joint council controlled by TRAI to set a uniform standard price for all mobile phone services across the country, for a promise of increased overall revenues for the telecom industry. Just as the ability to price their services is a vital power for telecom companies to run their businesses, taxation powers are the key for an elected state government to govern their state.

For an elected government to give up nearly all powers of taxation is an ‘Ekalavya’ sacrifice.

After GST, India is the only federal democracy in the world where democratically elected states do not have powers to levy meaningful direct and indirect taxes. Four years later, GST has neither delivered on its promise of a boost to economic growth nor increased tax buoyancy. Further, Covid lockdown has led to a crash in GST revenues with the centre unable to fulfil its revenue commitment to the states. So, states are left stranded with neither taxation powers nor tax revenues.

One may ask – why did the state government even agree to GST in the first place? For a country like India that has different regional political parties governing different states, GST was always an audacious idea. It is precisely for this reason that GST was in abeyance for nearly a decade. The DMK, which was in power in Tamil Nadu in 2009 was the first state to oppose GST on grounds of loss of fiscal freedom despite being part of the UPA coalition government at the centre. Many other states opposed the idea on similar grounds, including the then Gujarat Chief Minister Narendra Modi.

By 2017, most of the large states were governed by the BJP, which was also in power at the centre. So, it was easy for these states to be coerced into GST. It is very likely that had Gujarat, Maharashtra and Tamil Nadu been governed by different political alignments in 2017, India would not have had a GST regime.

The other question that arises is how would states have coped with an external Covid-type economic shock in the old Value Added Tax regime? The states’ fiscal positions would have been in equal disarray in a non-GST regime. They would have struggled to raise tax revenues and would have resorted to heavy borrowing.

Stripping states of their fiscal powers and then forcing them to borrow from the market is like tying Virat Kohli’s bat to a string and then asking him to face the fast bowlers. Virat, the genius, may still score a fifty but the states’ fiscal conditions are no Kohlis.

India’s GST is an outcome of the then favourable political landscape of the country and a precariously negotiated commercial contract. The fact is that India’s GST regime hangs on a loosely-stitched fabric of trust, commitment, and political coercion. In times of distress such as now, it is critical to strengthen this loose fabric with confidence, commitment, and comfort between the centre and the states and not weaken it with bureaucratic legalese.

Citing line 6 of paragraph 6.3 of the minutes of the 8th GST Council meeting where it does not explicitly state that the centre will be the one to borrow and fulfill its obligations to the states is not the best way to resolve this grave impasse. Neither is an offer of a “letter of comfort” to help states borrow. What is needed is an “Act of Comfort” by the political leadership of all hues because GST is first and foremost a political compromise, not an economic promise.

Postscript: Lest it be construed that this is a new position on GST, I have consistently argued how the idea of GST is in dissonance with India’s gaping political and economic diversity, in various columns from 2016 that can be accessed here.https://noise2signal.in/topic/topic/gst/

Praveen Chakravarty is a Political Economist, and Chairperson – Data Analytics in the Indian National Congress. The views expressed here are those of the author and do not necessarily represent the views of BloombergQuint or its editorial team.