On April 1, 2017, a hundred farmers from the southern state of Tamil Nadu (TN) with half shaven heads and moustaches, rolled naked on the roads in the scorching Delhi heat. These farmers had travelled more than 3,000 kilometers from their home state of TN to Delhi, carrying with them the skulls of their fellow farmers who had committed suicide, or so they claimed. These intense and creative protests were ostensibly to attract the Prime Minister’s attention to the drought situation in TN and a consequent clamour for waiver of their agriculture loans. It didn’t work. On that day, the Prime Minister inaugurated the “Smart India Hackathon” and spoke about the “era of the Internet of Things”.

Three days later, 1.5 crore farmers of the state of Uttar Pradesh (UP) were granted a waiver of their agriculture loans, totalling Rs 36,000 crore or $5 billion by the UP government. The farmers of UP did not need to indulge in creative protests for these loan waivers. They were just rewarded for voting the Bharatiya Janata Party (BJP) into power in their recent state elections. The TN farmers are still protesting, to no avail.

Imagine, if these protesting TN farmers were also told that they are actually helping pay for the UP farmers’ loan waiver.

Salt on their wounds and scars. Not only does Tamil Nadu not help its own distraught farmers but it helps pay for farmers in UP. Farmers from Maharashtra are also protesting for waivers of their loans due to drought. Their protests have also been futile but Maharashtra is the biggest contributor to UP loan waivers. This is the saga of India’s federal taxation quagmire. To be clear, this column is not about the ideology or economics of farm loan waivers but about India’s fragility as a tax union. UP wants to incur an expenditure of Rs 36,000 crore to waive its farmers’ loans. This will be over and above the Rs 50,000 crore in budget deficit that it already faces this year. UP will find it extremely difficult to borrow this additional Rs 36,000 crore on its own. Which means, it will need the Union government’s assistance either as direct loans or to serve as a guarantor for their borrowings.

In either case, the balance sheet of the Union government needs to be strong enough to support UP’s additional borrowing.

More than three-quarters of the Union government’s revenues are from tax collections, split roughly equally between direct and indirect taxes. HowIndiaLives, a big-data analytics startup, unearthed an answer provided by the Ministry of Finance in the Upper House of Parliament on July 22, 2014, providing details of state-wise personal income tax collection for the financial year 2012-13 (FY13). Using this unique dataset for personal income taxes, our own estimates for state-wise corporate tax collections and Income Tax Department data for indirect taxes, we estimate the state-wise contribution of all taxes to the Union government’s kitty for FY15. This is not based on zone-wise corporate tax data that has an inherent skew. Please find the detailed methodology here for calculation of state wise contribution to personal income tax, corporate tax, excise, customs and service taxes.

Maharashtra alone contributes a quarter (25 percent) of all of the Union government’s tax revenues. To put that in a global context, the largest state in the United States, California, accounts for just 12 of all tax revenues of the federal government. Four large states (Maharashtra, TN, Gujarat, and Karnataka) account for more than half of all tax collections of the Union government. On a per capita basis, the average Maharashtra resident (individual and corporate) contributes nearly Rs.33,000 per year to the Centre’s tax kitty. The average Gujarati, Kannadiga, and Tamilian contribute roughly Rs 20,000 each, per year. Contrast that with the average UPite who contributes just Rs 7000, roughly one-third of the average Tamilian.

The average Maharashtrian gives as much to the Centre’s tax kitty as the resident of five states put together – Bihar, Uttar Pradesh, Rajasthan, Bengal & Madhya Pradesh. 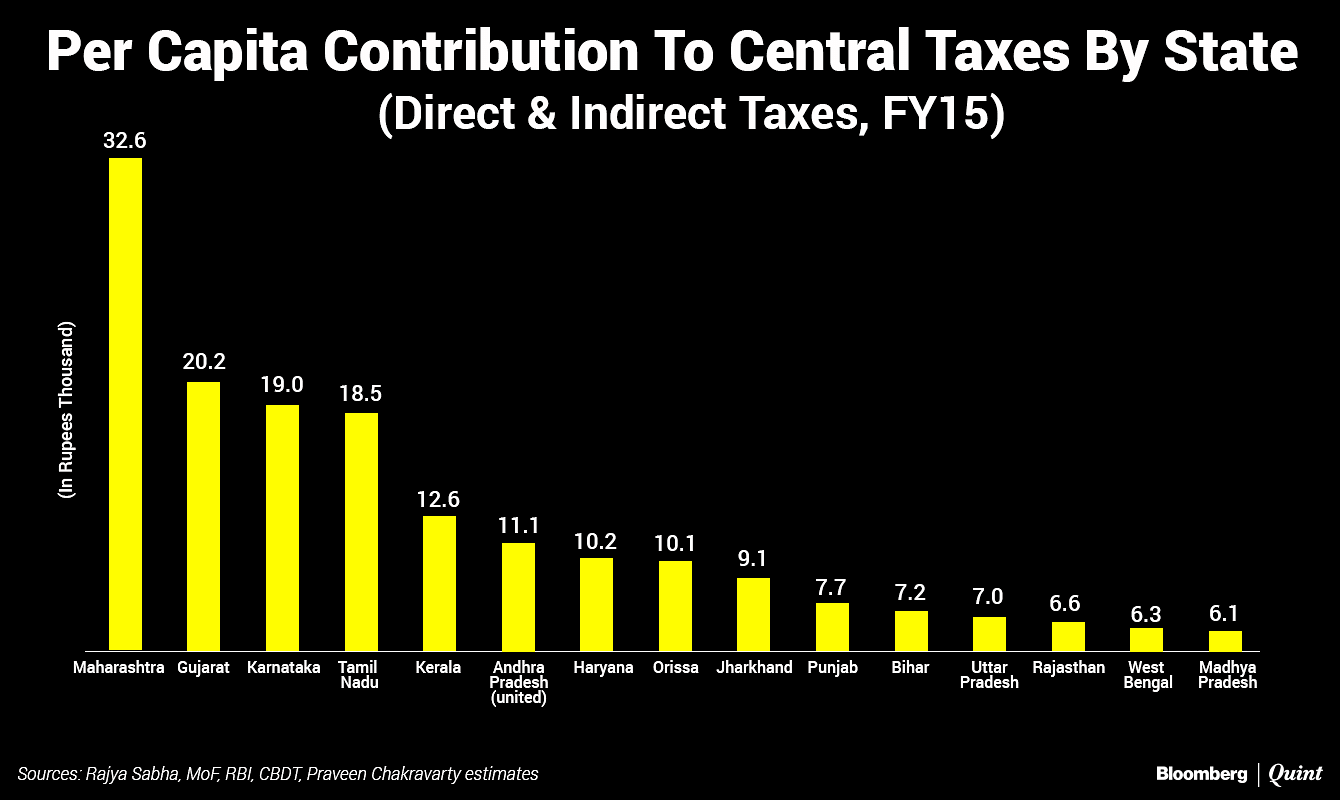 It is also true that the Centre gives money back to the states as devolution of resources from its pool of revenues. 42 percent of all tax revenue of the Centre is given back to the states and 58 percent is retained by the Centre for its expenses. So, each state contributes its share of taxes to the Centre and gets back a certain share. Understandably, the poorer states will get a larger share of the devolved resources while the richer states will get a smaller share. The chart shows that the Centre gives the average Bihari Rs 30,000 every year while the average Maharashtrian gets only Rs 4800. The average UPite gets back nearly twice as much from the Centre every year as the average Tamilian. 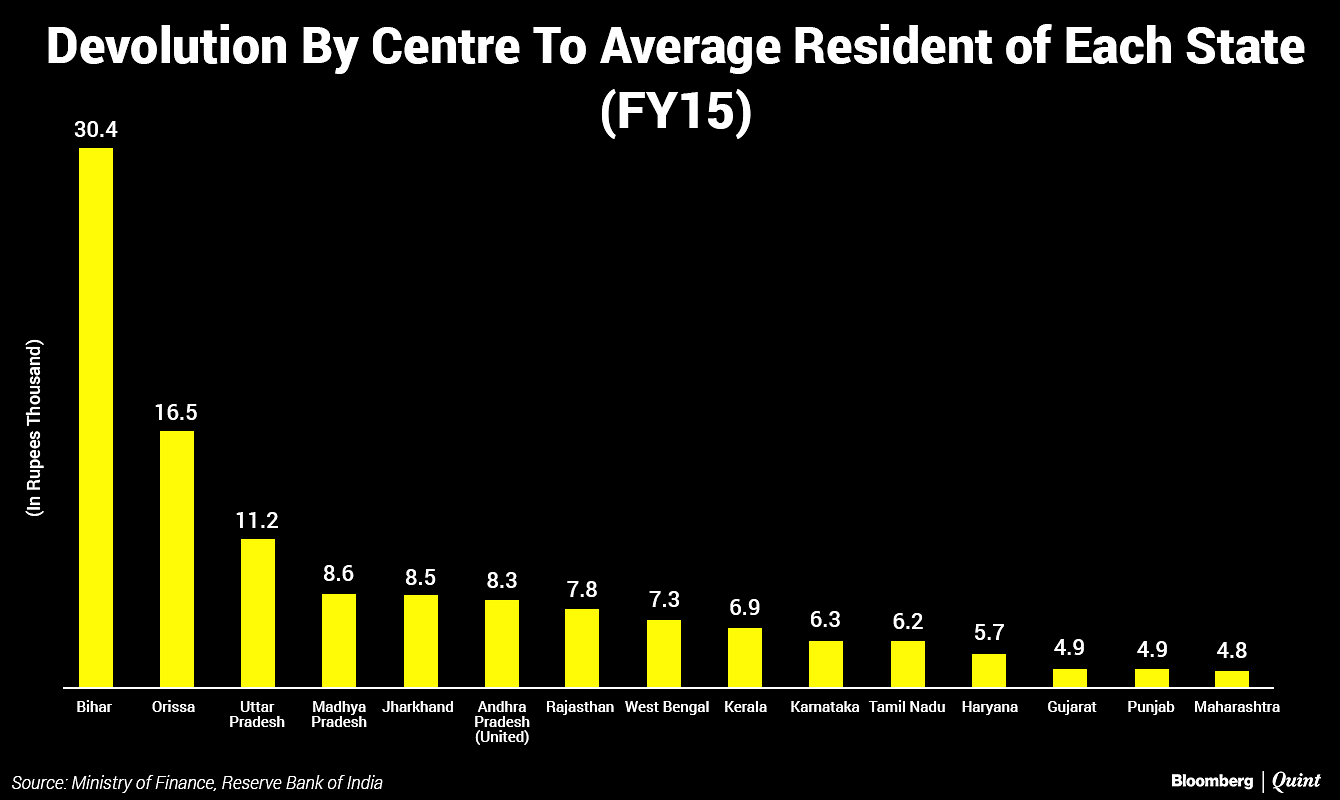 In essence, four large states – Maharashtra, Gujarat, Tamil Nadu and Karnataka – contribute all of the economic costs of building this nation. The farmer in UP can get his loan waiver only if the UP government is able to borrow money from outside. The UP government can borrow money only if the Centre provides either an explicit or an implicit guarantee. The Centre can provide this guarantee only if its revenues are strong enough to support. Centre’s revenues are strong primarily due to revenues from a handful of states. Admittedly, this is slightly exaggerated and provocative but only to highlight the skewed and complex redistribution exercise of India’s fiscal tax revenues. The GST regime will ensure a cleaner way to administer and collect indirect taxes but will not impact the skewed redistribution.

At a time when regional pride is being stoked in the rich states of Tamil Nadu, Gujarat, and Maharashtra, this continued skew in redistribution of tax revenues can potentially erupt into an emotive issue. Economic, political, demographic and social disparity among India’s states is much starker today than in the early years of the republic.

If strong regional political parties that cater exclusively to voters of their own state held forth in Maharashtra, Gujarat, and Karnataka, like they do in Tamil Nadu, India’s economic union can be severely tested.

It is no coincidence that Tamil Nadu has witnessed a spate of recent protests against everything that seemingly threatens its identity. It may be tempting to interpret the economic disparity among India’s states as a case for more redistribution from the richer to the poorer states. But given India’s unique political and social diversity, it will likely be counter-productive with adverse consequences. The time has come to let India’s states determine their own destinies, fiscally and politically.

The author is immensely thankful to HowIndiaLives, a big data startup, for data and research support .