Do most Indians really care about who governs Uttar Pradesh and Punjab? The only reason a Tamilian or a Bengali or a Maharashtrian is excited about the elections in Uttar Pradesh or Punjab is to glean an answer to the question – Will Narendra Modi be the Prime Minister of India again in 2019?

Does the grand sweep of the Uttar Pradesh assembly election by the BJP mean that Prime Minister Modi is set to win an outright majority in 2019 too? We will of course never have definitive answers to these questions but we certainly have a lot more clarity now in the run-up to the 2019 Lok Sabha elections. We can certainly build some scenarios to understand the plausibility of Prime Minister Modi returning to power in 2019 with an outright majority again.

While our frenzied media may want us to believe that every state election is some harbinger for the national elections, the fact is, nearly two-thirds of the 29 states and 7 union territories of India do not matter electorally for the national elections. Just one-third of these 36 states and union territories account for 80 percent of all Lok Sabha seats and half of them for 95 percent. As the chart shows, only the few large states to the left of the line matter while the long tail of states on the right doesn’t. 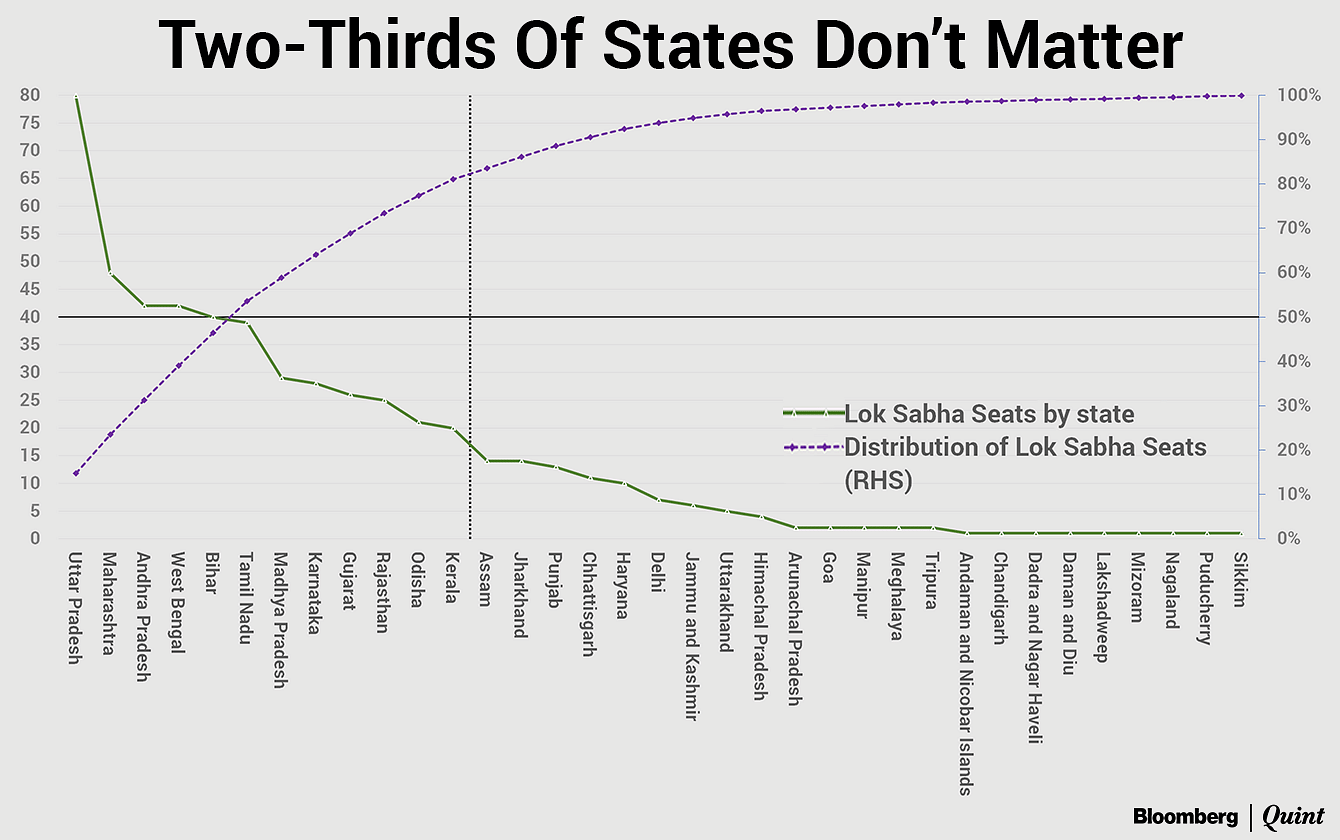 The BJP won 254 of its magic tally of 282 Lok Sabha seats in the 2014 national elections from just these 12 states and a mere 28 seats from the remaining states combined!
It won 80 percent of all seats on offer in these 12 core states in 2014. Was this a one-time “black swan” event or can the BJP repeat its astounding success in 2019 in these core states is the main question? It is then important to understand how the BJP has fared in its core states since 2014. One can do that by extrapolating from the state elections that have been held since May 2014 in seven (UP, Maharashtra, Bihar, Assam, Jharkhand, Haryana and Delhi) of the 12 core states of the BJP.

Each Lok Sabha seat is divided into multiple assembly constituencies. To win a Lok Sabha seat, typically but not always, a candidate has to win a majority of the assembly constituencies that fall under that Lok Sabha constituency. The BJP had won a total of 818 assembly segments from these seven states in the 2014 elections. After the spate of state elections between 2014 to 2017, the BJP’s tally of assembly segments in these seven core states that went to polls dropped from 818 to 634, primarily due to Bihar and Delhi.

That is a decline of 184 assembly segments in seven core states since 2014 for the BJP.

The table below summarises BJP’s performance in state elections in its core states.

Purely for the purpose of this analysis, one can aggregate these assembly constituencies into Lok Sabha seats to glean how many equivalent Lok Sabha seats the BJP has won in these seven states post 2014.

The next logical question then is, can the BJP make up for this loss of 19 seats from the other core states?

Five (MP, Karnataka, Gujarat, Rajasthan and Chhattisgarh) of the BJP’s core 12 states are yet to hold a post-2014 assembly election. The BJP won 105 of the 119 available Lok Sabha seats in these five states in 2014.

Which means, even if the BJP were to improve its performance in these five states and win an unprecedented 100 percent of all seats on offer, it will only gain another 14 Lok Sabha seats.

Despite the enormous charisma and public adulation of Prime Minister Modi, it is only fair to presume that it is extremely unlikely for any political party to win 100 percent of all seats in five states. The progression of BJP’s estimated Lok Sabha seats in its 12 core states is in the chart below. The dotted line represents the halfway mark. So, the next logical question is can the BJP gain 19 seats from its non-core states to offset its loss in its core states? 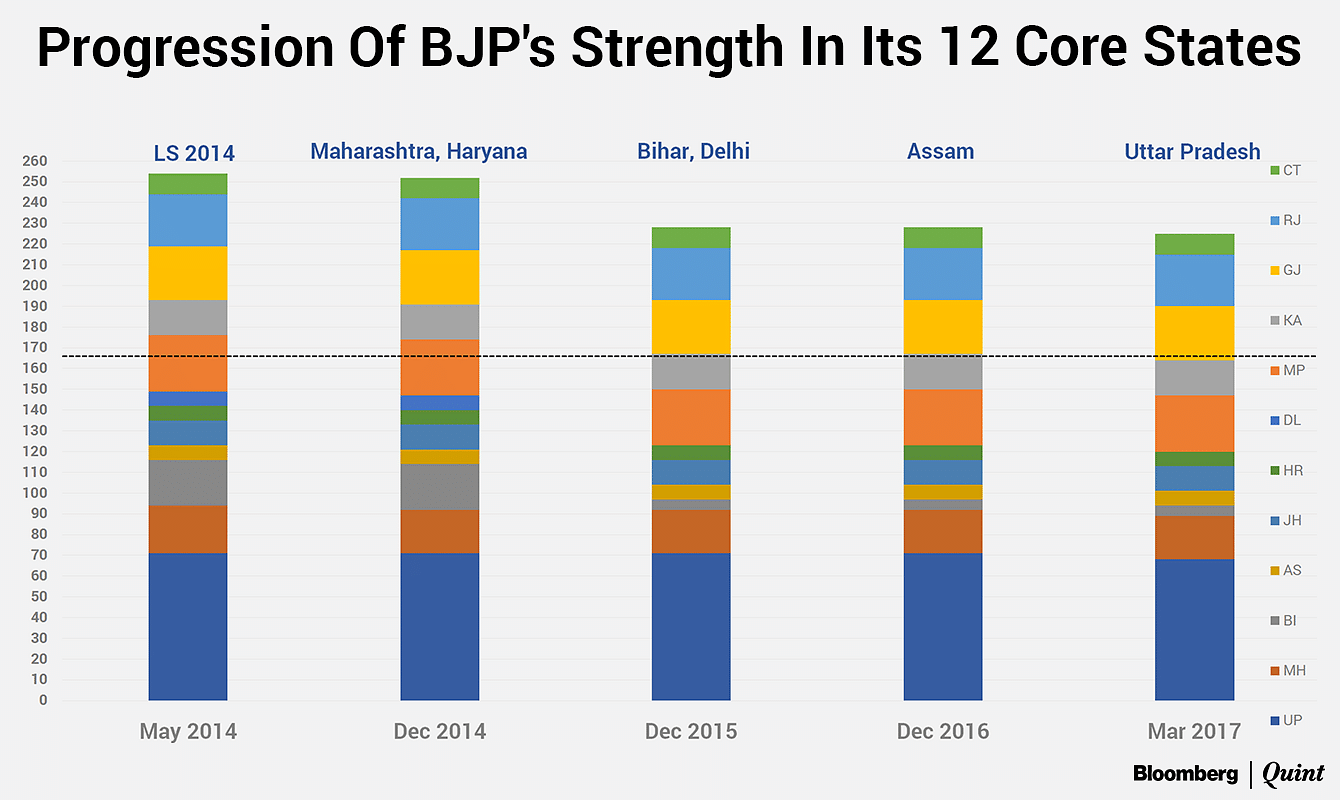 There are 24 other states and union territories that were not core-BJP states in 2014. Of these, just seven states of Bengal, Tamil Nadu, Orissa, Andhra Pradesh, Kerala, Telengana and Punjab account for 177 Lok Sabha seats. The others are too small and account for a mere 34 seats combined.

In summary, the BJP’s performance thus far in state elections in its core states reveals a shortfall of just 19 seats for an outright majority in 2019 but it is difficult for the BJP to recoup these seats in its non-core states without an alliance.

Analyses such as these merely help visualise different scenarios under different assumptions. This analysis has focused only on the BJP’s own performance and not that of its allies which is usually a big game changer in Indian electoral politics. Under the assumptions that recent state electoral trends will carry forward until 2019, and that the BJP will continue to overwhelmingly dominate in its core states that go to polls next year, Prime Minister Modi may at best be short by about 20 seats of an outright majority of his own in 2019.