To call demonetisation a political success is not accurate 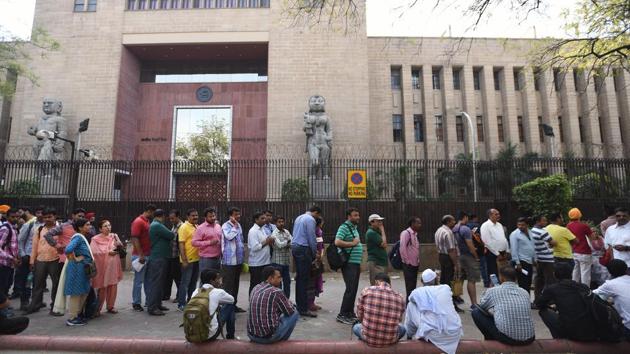 People queue up outside the RBI in New Delhi to submit their demonetised bank notes on last day of currency exchange in New Delhi, March 31. In India’s notorious first-past-the-post system, winning an election does not necessarily reflect increased popular support.

On December 30, 2014, there was a sudden announcement to ‘withdraw’ India’s ‘high-value’ cricketer, MS Dhoni, from circulation immediately. It shocked all Indian cricket fans. Dhoni was India’s captain and the most experienced player in the team. The ‘regulator’, Board of Control for Cricket in India (BCCI), was caught unawares and left to deal with the ramifications of this decision. There was uncertainty and trepidation for the future of Indian cricket. Only, Dhoni decided to ‘demonetise’ himself; this was not coercion. In the two years since the ‘Dhoni demonetisation’, India has won 20 of the 29 Test matches it has played, one of its most successful runs in its cricketing history. Dhoni ‘withdrew himself from circulation’ suddenly and India won most of the Test matches played immediately after. Does this mean that the sudden ‘demonetisation’ of Dhoni was a cricketing success? If this sounds bizarre, then so is the narrative that India’s sudden demonetisation of high-value currency was a political success.

The argument that demonetisation is a political success for the BJP is not very different from the argument that Dhoni’s sudden retirement was a cricketing success. This argument presupposes that the BJP would not have won these elections otherwise and demonetisation was instrumental in their victory. Any counterfactual proposition is difficult to prove, but if the scale and quality of the BJP victory in the 2014 elections is any indicator, then it is clear that it did not need a risky experiment such as demonetisation for it to win the elections that it did. It is evident that demonetisation was not a big negative to pull down the BJP’s support base but that is not the same as saying that it helped the BJP win elections and hence it is a political success.

Too often, pundits come up with big narratives to explain electoral outcomes based on a simplistic win-loss headline. This runs the risk of drawing the wrong conclusions and leading to false policy choices. Surely, the lesson from demonetisation for political parties cannot be that risky, audacious and ill-thought economic policies are good political strategies. To call demonetisation a political success is inaccurate.

(With inputs from Ishita Trivedi)