Praveen Chakravarty writes: Increased government investment to stimulate economic activity is in principle a sound philosophy. But there are other more prudent ways to raise funds. 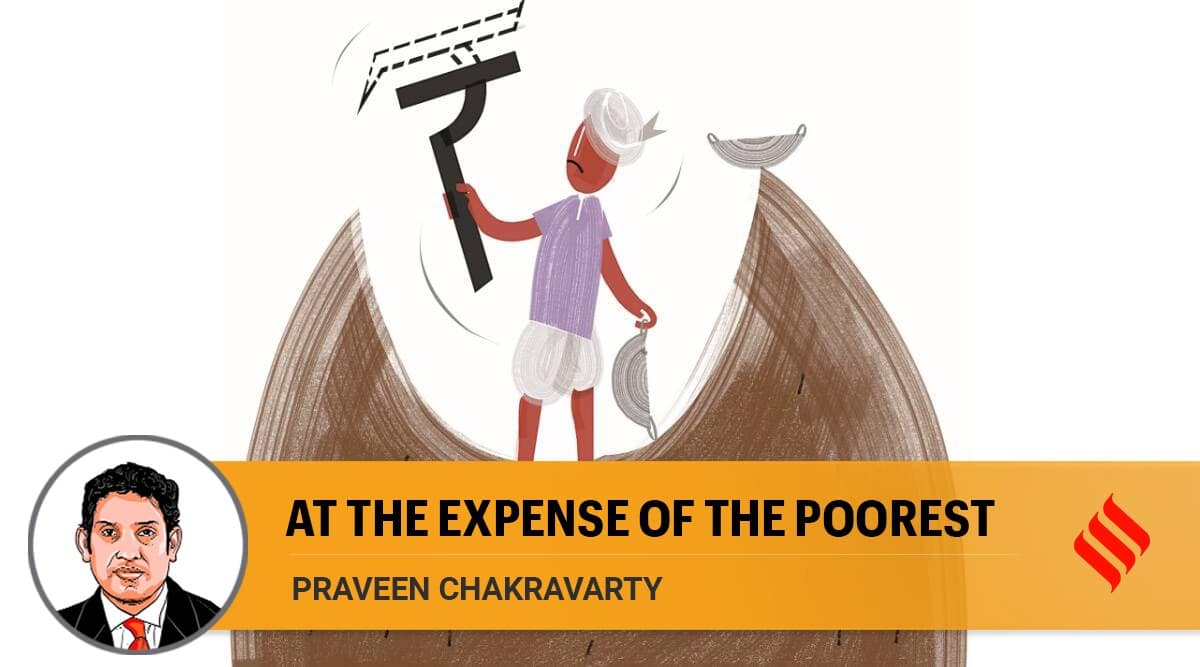 This is a stunning reversal of opinion about MGNREGA, which was lampooned just a decade ago by the private sector, policy commentators and then Chief Minister Narendra Modi as a “dole” for the poor that would render them lazy and indolent. Illustration: C R Sasikumar

A week before the Union budget was to be presented, the chairman of Hindustan Unilever (HUL) wanted the finance minister (FM) to plan for a Mahatma Gandhi National Rural Employment Guarantee Scheme-type programme for the urban poor. He reasoned that personal consumption, which constitutes nearly two-thirds of India’s economy, has been badly hit and schemes like MGNREGA should be extended and expanded until consumption recovers fully.

This is a stunning reversal of opinion about MGNREGA, which was lampooned just a decade ago by the private sector, policy commentators and then Chief Minister Narendra Modi as a “dole” for the poor that would render them lazy and indolent.

Ironically, the Economic Survey of 2021-22 proudly states that MGNREGA provided a safety net to more than 110 million poor Indians. For context, all the companies listed in the stock exchange and unicorn start-ups, put together, employ a mere seven million people.
But, in actuality, more than 110 million would have been reliant on MGNREGA this year, had the programme not run out of money after just six months in the current financial year. Demand for work under MGNREGA, which is by design an unemployment insurance scheme for people plunged into penury, is at record highs and ostensibly many were turned away due to lack of funds.

Amidst this backdrop, the FM outlined a new economic philosophy in the budget that moved away from direct government welfare assistance for the needy to an indirect “trickle down” economic impact. Belying expectations of an extended and expanded MGNREGA, conversely, the FM cut the programme’s budget and reallocated that sum for government capital expenditure.

To be clear, lower MGNREGA demand should be our primary economic objective as a nation. It is a demand-based programme and if people are able to find better quality jobs than toiling for minimum wages, MGNREGA demand and hence expenditure will also be lower. But turning people away due to lack of funds and artificially suppressing MGNREGA demand does not behove a democratically elected government.

The Union government plans to spend an additional Rs 2.5 lakh crore in capital expenditure next year than it did in the current year, including Rs 1 lakh crore as loans to states exclusively for capital expenditure. Sixty per cent of this additional capex amount is budgeted to come from a reduction in food (ration), fertiliser, fuel subsidies and MGNREGA.

The government’s fundamental premise is that we are past the pandemic blues and next year will be a normal year. Additional food grains given during the pandemic can be withdrawn and food subsidies can be cut by Rs 80,000 crore is the belief. Similarly, the government seems to believe that MGNREGA demand will taper off next year and has cut its allocation by roughly Rs 30,000 crore. The government’s conviction that next year will be a “business as usual” pre-pandemic year is a dangerous gamble.

It is important to recall that in September 2019, outside the budget cycle, there was a sudden announcement of a dramatic reduction in corporate tax rates. As a result, of the more than nine lakh corporates that filed income tax returns last year, the top 433 companies with profits greater than Rs 500 crore paid taxes at the effective rate of 20 per cent while in FY2019 these companies paid an effective tax rate of 27 per cent.

Profits of these top 400-odd companies have doubled and their market value has increased three times since 2019. But the total number of people employed by these companies remained the same. To put it simply, the corporate tax cuts have cost the government Rs 3 lakh crore thus far (Rs 1.5 lakh crore per year), they have doubled the profits for companies, but created no new jobs.

Since the government believes that next year will be a normal year like 2019, the corporate tax rate could have been reverted to the 2019 rate. Doing so could have garnered at least an additional Rs 1 lakh crore in tax revenues, likely more, which could have been used for increased capital expenditure without the need to cut down on welfare.

There would have been no economic or social repercussions to this move since these companies have neither increased investment nor created jobs after the tax cuts and they were used to paying tax at that tax rate anyways. Similarly, with booming stock markets and massive increases in the capital wealth of a tiny few, an increase in the securities transaction and capital gains taxes could have fetched an additional Rs 50,000 crore at least, to be used for increased capital expenditure. India’s capital gains and corporate tax rates are among the lowest in the world, which have fetched no “dividends” in terms of investments or jobs for people. There was a clear and justified rationale to spur government capital expenditure through increased corporate and capital gains tax rates and not by reducing welfare expenditure at such a precarious time for the economy.

Increased government investment to stimulate economic activity is in principle a sound philosophy. Reducing MGNREGA expenditure is an optimum objective but one that should be achieved naturally, not forcefully. Reducing welfare expenditure to fund capital expenditure in the hope of a “trickle down” economic benefit is a dangerous gamble at this time. Especially, when there were other more prudent ways to raise funds through increased progressive direct taxes on large corporates with no deleterious impact. For the nation’s sake, I sincerely hope the dangerous gamble by the Modi government to fund government investment by reducing safety net allocations pays off, though I remain sceptical.